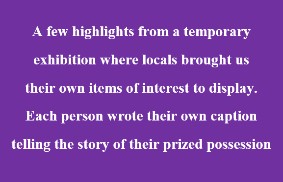 2005 Every Object Tells a Story “MRS DUCK”
My name is “Mrs Duck”. I lived on Mother’s side of the mantelpiece,
holding ribbons and hair slides.
During an Air Raid I moved during the bombing but did not fall.
Over the years since 1928 I moved several times and I am now slightly battered in Devon.
(My parents wedding was in 1928)
Florrie Watt. “Vulkan” belonged to my husband’s Uncle, who was a strict teetotaller. He used to take the engine to temperance meetings and fill the boiler with water-having previously filled the spirit burner with methylated spirits. He would then light the wicks, Vulkan would run across the platform and he would say “There now, that can run on water and so can you”! As my husband pointed out this was more than somewhat hypocritical, as it actually ran on the correct mix of spirit and water.
Made by E.P.- Ernst Planck (1866-circa 1930)
Steam driven dating about 1870.
Sheila Hendry. Visiting HIROSHIMA after the disaster, Chief Mechanician DVG Williams RN picked up from the ground this little bowl with its blue decoration of the sacred Mount FUJI. It’s cracked and chipped and part-filled with a grey lump.
That lump is glass, probably from a window, which has liquefied by the heat and run into the bowl where it eventually cooled and set.
Marilyn Bishop, daughter of Chief Mechanician DVG Williams RN DID YOU EAT TULIP BULBS IN 1945?
Regrettably this was part of the diet of many of the Dutch population following the retreat of the Nazi army during the winter of 1944/5 during which they pillaged the land leaving the people to nearly starve.
In the spring of 1945 the Dutch Government sent out an appeal to the families of Britain to save the children of Holland.
I am proud to say our late parents Tom and Phil Packham were one of those many families who opened their homes and hearts to these children. A ten year old boy appeared at our house called:
TJISTE JONGSMA
My mother cried when she saw him, he was emaciated and where his stomach was, a hollow existed beneath his rib cage large enough to hold an orange. We had strict instructions not to feed him too much. He lived with us for a few months and then returned to his family.
On his return the Dutch Government presented al the British families with this plaque as a token of their thanks.
I am proud to say we have remained friends ever since and Tjiste will be visiting us again in June 2005 celebrating our 60 years of friendship.
Jack Packham. These Siamese dancers anklets were given to my grandmother Winnie by her first husband Ernest Taylor in 1912.
At the age of 18 Winnie travelled (with an escort!) to Malaya to marry Ernie. He met her boat and they were married the same day.
Sadly Ernie died of Typhoid after only 13months of marriage. Winnie returned home, pregnant, by ship and made her way through war torn France by train. She re-married 8 years later.
The anklets were said to be over a hundred years old and were owned by the King of Siam’s favourite dancer. This tiny ivory mouse was given to my mother when she was a child living in Amsterdam. The mouse is the symbol of Amsterdam. She treasured this but unfortunately when we were burnt out (1949) it got lost in the chaos of removing as much as possible from the house. A number of years later it was discovered tucked into the wicker of a log basket, which had been used to remove smaller items from a cabinet. Ann Sabel Framed sampler made by Ellen Winsor in the 1880’s while she was a pupil at Lord Churston’s School.  Helen looked after Ellen Winsor when she was in her 90’s in 1960’s.The sampler would have been made when she was 11.  Ellen had treasured it and kept it in tissue.  Ellen lived on the Churston Estate and courted her husband for 20 years.  They had to wait for a cottage to become available on the estate before they were allowed to marry. Helen Nelder PAIR OF CHILDREN’S CLOGS- C.1880
These clogs/pattens belonged to Mr Will’s grandmother who lived in Devonport, Plymouth.
His grandmothers elder sisters had use of them first. They might have been made by her father who was a blacksmith in St. Minver in Cornwall.
The family moved to Devonport, the father becoming a boiler-maker.
Richard Wills.