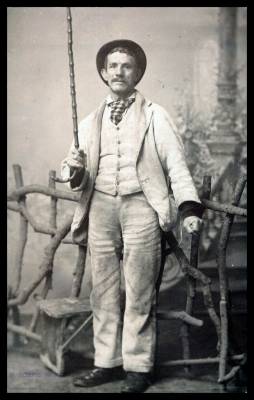 The following is a transcript of handwritten notes made by Mr. Frank Zealley in the 1940s; reminiscing about street life in Newton at the turn of the 20th Century

Many local characters and Hawkers of interest, were well known in the Town by their Nicknames.

Diana Ticktacks was a second- hand seller and rag dealer who carried her stock on her person and was known to wear numerous skirts, blouses, coats, petticoats et, on her rounds. She was a well-built woman and the additional garments made her look immense. She was the sport of the small boys who called out to her and she used to chase them for short distances, vowing vengeance.

Screeching Jenny was a Fishmonger and sold her wares in no mean voice, hence her Nickname.

Another character was an Italian who had a barrel organ, with a budgerigar in a cage who picked a small card with a fortune teller on it for a donation of 1p. He also had a small monkey dressed in clothes and wearing a pillbox hat and danced to the music of the Organ.

Albert Dymonds was a well-known character who slept out rough anywhere he could and used to earn money from local farmers by doing any odd jobs for a few pence. He also used to sing for a penny, usually ‘My Father had Two Little Piggies.’

The boys used to gather around him and ask him to sing and he would give another rendition of his song, before which the lads would run away and listen to his raging anger. After he had earned some money he would go for a drink, then go outside and want to fight someone. He would then be locked up, where he was well known regular visitor. His case usually ended with a fine of 10\- or 7 days. As he had no money he usually had to do prison service saying ‘Can’t do it Mister, I got to go and cut Chaff for Farmer X’, which would amuse the Court.

Johnny Lomax lived in a small shop in Wolborough Street and was a street vendor and in the winter, used to sweep Chimneys. On one occasion, he built a new Ice Cream Parlour in a room behind the shop and painted it up for the summer season. When he was ready to start, he found he could not get in through the door, so with much bad language, he had to dismantle it again.

Very often, when sweeping chimneys, he would forget how many rods he had used and when he went outside to see if his brush was out, he was greeted by the brush outside the front door, waving gently in the breeze or laying on the granite.

Many other street vendors were heard in the town and their calls varied with the season.

Torbay Mackerall -24 for a Shilling, Hot Cross Buns on Good Friday were very popular and many boys used to take a tray from the Baker to cry around the town in the early morning, Blackberries and Wortleberries were also peddled from door to door at so much a quart.