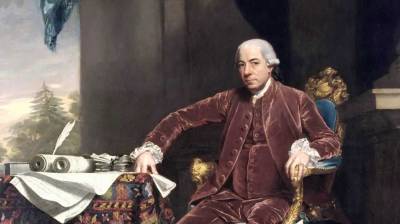 What was an Ex- President of the Transitional Government of the USA, Doing in Newton Abbot in 1780, Three Years Before the American War of Independence was Over?

Henry Laurens was of Huguenot stock whose ancestors moved to the America in the late 1600’s, arriving in New York, then settling in Charlestown South Carolina. Laurens served in the Militia and rose to the rank of Lt Colonel in a campaign against the Cherokee Indians and later in the French and Indian Wars, that pitted the colonies of British America against those of French America.

America in the late 1600’s, arriving in New York, then settling in Charlestown South Carolina. Laurens served in the Militia and rose to the rank of Lt Colonel in a campaign against the Cherokee Indians and later in the French and Indian Wars, that pitted the colonies of British America against those of French America.

He was very rich making his fortune from slavery, as a partner in the largest slave trading house in North America; in 1750 alone, his firm oversaw the sale of 8000 enslaved Africans.

As the American Revolution neared, he was inclined to support reconciliation with the British side, probably to protect his business interests and because both he and his son were educated in England, but he later switched his allegiance to the American position.

In 1775 the American Revolutionary War (later known as the American War of Independence) began and Carolina formed a revolutionary government in 1777, from which Laurens was elected to the Continental Congress[1], a provisional American government, where he served as President for one year until 1778.

In 1779 he was appointed as a special envoy to the Netherlands, negotiating in 1780 their support for the revolution, but on his later return to Amsterdam his ship, the Mercury, was intercepted by the British Frigate Vestal off the coast of Newfoundland. There was an attempt to jettison incriminating documents, but they were recovered and were found to include a draft American-Dutch Treaty.

When word reached the British authorities, they immediately declared war on the Netherlands, known as the Fourth Anglo-Dutch War[2].

On landing in Plymouth in 1780 Laurens was charged with Treason and was to be transported by Post Coach to the Admiralty in London. However, on an overnight stop in NEWTON ABBOT he advised the Admiralty that he could not undergo the fatigue of continuing the journey to London and begged a few days’ rest, which was immediately granted. However, soon after receiving the dispensation from the Admiralty he claimed to feel better and wished to continue to London.

There is no record where he stayed, but one possibility was the Turks Head, a major coaching station on the road from Plymouth to London, with stabling for 50 horses and room for 2 Stagecoaches. Perhaps he decided to recover early because staying at the Turks Head, located in in the old Market area, was not exactly salubrious. Better off in The Tower.

He arrived at the Admiralty at 5.30 pm and was immediately interviewed about his dealings with the Dutch. He was sent to the Tower[3], awaiting a decision on his fate.

At the time it was common practice to exchange prisoners and in 1781 Laurens was exchanged for General Lord Cornwallis, who had been captured by the American forces a few months earlier. He was the allowed to continue his journey to Amsterdam, where he raised funds for the American war effort.

In September 1783 representatives of George 3rd and the USA met in Paris to negotiate of the end of the American Revolutionary War. Laurens was part of the American Delegation.

[1] The President of the Continental Congress was largely a ceremonial position without much power, serving as a neutral moderator and unrelated to the office of the President of the United States. The Congress itself had no legislative powers but was formed to establish a perpetual union between the original 13 States no longer under British Rule.

[3] The only American ever imprisoned in the Tower.

[4] Although Laurens was a leading Slave Trader, a Town was named after him and to this day he is feted as a great American. His Slave Trading is referred to as a “Business”.