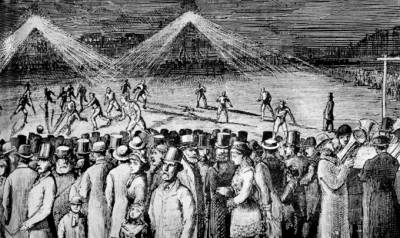 Floodlit Football-Newton Abbot Hosted One of the First Games.

The first Association Football Game to be Floodlit was on the 14th October 1878 at Bramall Lane, when a crowd of 20,000 fans attended. Bramall Lane is now the home of Sheffield United, but at the time may have been the home ground of The Wednesday Football Club, as there was a change of ownership in the late 1870’s.

Just four months later, on the 17th January 1879, at 7.30 pm, the South Devon Football Ground hosted a Floodlit Match between Teignmouth and South Devon teams; the result was a draw, but Teignmouth was deemed as winning by three saves.

The team members are not known, but the South Devon team probably included members from as far as Plymouth and Exeter.

For the technically minded the lighting was provided by Messrs C W Provis & Co of Manchester and consisted of a “12 HP Power Engine, which produced four of Siemens’ lights by an electro-dynamic

Machine 700 to 1000 rpm – equal to 15000 Candles”. The light was said to be steady and satisfactory, resembling very bright moonlight, although there were occasional flickering and blackouts. Whilst the players could be seen in the centre of the ground with tolerable distinctness at the Corners they were enveloped in dense shadows.

The Siemens’ lights mentioned were possibly their invention of a “differential arc lamp” which avoided the need to continuously trim the carbon rods, that regularly burnt out. The new design allowed several arc lamps to be run from a single generator, where previously each lamp needed its own generator.

This was a major coup for the Newton club, as it wasn’t until 1883 that the fist floodlit international match took place, between Scotland and England.

Note: The location of the above image is not known.