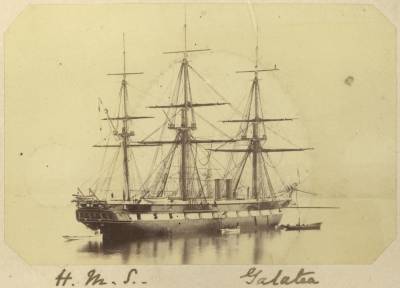 A Bizarre Accident Involving the Duke of Edinburgh, an Old Soldier, an Elephant, Newton Abbot Station and Wolborough Churchyard

When I say the Duke of Edinburgh, I don’t mean the present incumbent, although he had an accident recently, I am referring to Prince Alfred the second son of Queen Victoria. At the age of 12 he joined the Royal Navy and qualified in 1858 as a Midshipman, rapidly rising to be Captain of the HMS Galatea in 1866 (obviously nothing to do his parentage). In 1867 while still in command of the Galatea he began a world tour, visiting Gibraltar, South Africa, India, Australia (where he was wounded in an assassination attempt), New Zealand and Japan.

Whilst visiting India William Rogerson Paton helped the Duke capture an Elephant known as Tommy, at Sir Jung Bahadoor’s private jungle and Paton was rewarded for his bravery, by being bought his discharge from the Royal Marine Artillery to be appointed keeper of Tommy. Paton signed articles to become keeper for a period of 5 years at £75/year and two suits of clothes. Tommy was immediately put to good use in India, loading 300 tonnes of Coal onto the Galatea, saving the work of 30 men.

HMS Galatea arrived back in Plymouth in June 1871 where the Duke, Tommy and Paton proceeded through the City in a Carnival Procession to catch the Mail Train. To assist Paton two Keepers from the Zoological Gardens met the Duke, to oversee the loading of Tommy into a Horse Box for the onward Journey to London.

There were reports that Tommy and Paton were inebriated before loading onto the Train, but this was disproven at the inquest. But, somewhere between Plymouth and Plympton Tommy became very restless and smashed the wall of the Horse Box; Paton attempted to calm him, entering what remained of the Box, but his endeavours resulted in him being pushed to the floor behind the animal. At each stop there was contradictory evidence given at the Inquest by the Keepers and the Station staff; at Kingsbridge Road the Station Goods Clerk suggested that the box should be opened, but one of the Keepers panicked and said “don’t open the box because he will kill us all”. Consequently, Paton was left injured until the Train arrived at Newton, where Tommy was removed from the train onto the Platform and Paton was found dead.

The Duke was informed of the accident and was much concerned and immediately agreed to pay all the funeral costs, including a suitable monument to remember William Rogerson Paton. He was interred at St Mary’s Wolborough, with the grand headstone inscribed:

“Erected by HRH Duke of Edinburgh in memory of Gunner W. R. Paton RMA, Age 31. Born Torthowald, Scotland, killed on the Railway 1871. Thy will be done.”

Fast forward to 1891, when the Churchyard was expanded and the wall that separated the old churchyard from the new was removed and it was found that the grave had been neglected and time had defaced the inscription. An old Seaman named Thomas Smith of St Leonard’s Terrace, who served under Admiral Sir Robert Stockford and Commodore Sir Charles Napier at the storming of St. Jean d’Arce but had long since left the service, often visited the grave of Paton, whom he regarded as a comrade and noticed the gradual decay.

But a thought struck him that The Duke would be travelling to Plymouth very soon and may stop at Newton Abbot for a few minutes. He decided to go and meet the train and attempt to tell the Duke of the decay of the grave. He donned his best toggery and medals and did indeed meet the Duke. The Duke was much concerned regarding the grave and instructed his Secretary to write to Rev A. H. Simms Rector of Wolborough Church to commence a thorough renovation of the grave, including re-cutting the Inscriptions and the letters being leaded. The work was soon completed.

1.      Two photographs of the restored grave were taken by Mr Mudford at the suggestion of the Rector. It is not known if these still exist.

2.      Tommy joined the Duke’s other five Elephants at Sandringham.

3.      Paton had several Siblings, two at least were renown Churchmen and Missionaries.  One Rev James Paton of Glasgow presented Thomas Smith with a handsomely bound biography of Rev John Paton’s (William’s brother) missionary work in the South Seas. Thomas Smith always said it was his most treasured possession.

4.      The reports at the time kept referring to William R Paton as an old soldier, in fact he was at most about 40, whilst descendants say 32. Perhaps they meant veteran.

5.      Thomas Smith was quite a local celebrity in his own right, an ex Navy man, possibly the first Postman in Newton and the only one at the time. He gained long term mail contracts between Brixham, Torquay, Newton Abbot and Buckfastleigh and became the leading Cab Proprietor in the Town. He was a lifelong advocate of abstinence and was seen as the father of the abstinence movement in Newton, in fact his body was taken to the Temperance Hall, before being interred in Wolborough churchyard. His funeral was attended by many dignitaries of the Town.