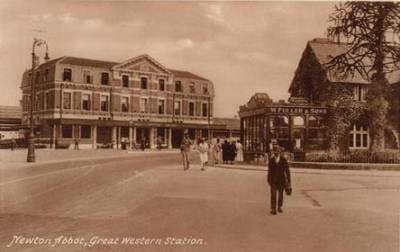 (The Street Numbering changed sometime between 1870 and 1900, probably due to additional properties being built at the Railway end of Queen Street. It was later 150 Queen Street)

“A pleasant hour may be passed in a home of sweet-scented flowers like the Courtenay Nurseries at any time. To visit such a place now, when the flowers are in bloom, filling the air with their perfume is delightful. It enables one to forget one’s cares, small or trivial though they be, to banish the fears of pessimism and to rejoice that after all there are more charming spots within easy access than we are sometimes inclined to imagine”.

This described a visit by a local Journalist to William Fuller’s, Courtenay Nurseries, opposite the Railway Station on the 1st August 1896.

(I wonder how many bedding plants he got for his fulsome praise.)

William Fuller the father of the 1896 proprietor, started the business in the 1840’s selling seed potatoes from his home at Whitehill Cottage, Whitehills. He is listed in the 1851 Census as a Gardener/Servant, so presumably not a wealthy man, yet he was able in the 1850’s to start his first Nursery in Bank Gardens, not far from Bank Street, before moving to Courtenay Park.

At that time Courtenay Park was just a common field devoted to the cultivation of turnips[ii]; Queen Street was a narrow lane; the houses that fringed Courtenay Park had not been built and the nearest properties were at Devon Square.

William Fuller by 1861 had enclosed two acres of the former turnip field, built his house shown above and relocated his Nursery. The journalist records that at the time there were two Railway Stations,[iii] the approach to the up line was where the Railway Inn is now located.

By the 1870’s the Nursery had developed the whole of the bottom of Courtenay Park and was chiefly devoted to the growing of flowers, herbaceous, other plants and shrubs. Thirteen greenhouses and two workshops occupied about half the plot. There were some interesting pot plants rarely seen, including Eucalyptus Corridor which had come into prominence at this time as a healing remedy. Many other plants were offered, often newer hybrids of Fuchsias, Hydrangeas, Ivy Pelargoniums, Gloxinias, Heliotropes, Gladioli and Dahlias. A Fern House housed a wide variety of unusual, curious palms and ferns.

What is interesting to know is how William Fuller managed in relatively short time to grow his business from being a Gardener/Servant selling seed potatoes from a cottage, to building a large house, with a two-acre Nursery in a prime spot opposite the Railway Station.

Much is speculation, but we do know that William Fuller married Albenia Watkins in 1832, at St. George’s Parish, Hanover Square. William was born in Westerham, Kent and Albenia was from Isleworth and we know they lived in Isleworth until at least the early 1840’s. Hanover Square, Westerham and Isleworth were all affluent areas at this time, so it is possible that they inherited money or assets to start their business.

William and Albenia displayed their plants at Horticultural Shows all over South Devon, following the fashion of the time of propagating and showing exotic plants and new hybrids. They were also regarded as premier florists, providing cut flowers for local society weddings and charity events.

William died in 1892 and Albenia in 1904, passing their business onto sons and grandsons. It is not known when the business finally finished, but a Frank Fuller was still listed as a Seedsman in 1937, but as a retired Nurseryman aged 80 in the 1939 Population Survey. Members of the family still lived in the house until at least the early 1950’s.[iv]

[ii] Difficult to imagine Courtenay Park as a Turnip patch.

[iii] In the 1850’s the Railway had two and later three separate train sheds covering the separate lines. It was rebuilt in 1861 as a single station with a larger train shed covering all three platforms

[iv] On the front of the house today can still be seen a square projection, where the Conservatory was in the photos above.